The store will not work correctly in the case when cookies are disabled.
Do Blue light Filter Glasses Really Work?
Jun 25, 2020
By frames
Blue light
0 comment(s)

The harm of blue light to the human eye is mainly caused by eye pathological damage and human rhythm damage leading to myopia, cataract and macular degeneration.

harmful blue light has extremely high energy, can penetrate the lens to reach the retina, causing atrophy or even death of retinal pigment epithelial cells.

The death of light-sensitive cells will result in decreased or even complete loss of vision, which is irreversible. Blue light can also cause macular degeneration.

Especially the children's crystals are clear and cannot effectively resist blue light, which is more likely to cause macular degeneration and cataract. Computer glasses blue light. 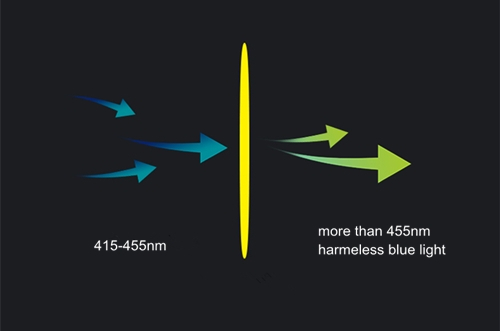 2)  blue light damage second visual fatigue: due to the short wavelength of blue light, the focus point does not fall in the center of the retina, but a position closer to the front of the retina.

To see clearly, the eyeball will be in a state of tension for a long time, causing visual fatigue. Long-term visual fatigue may lead to deeper myopia, double vision, easy serialization during reading, and inability to concentrate, which affects people's learning and work efficiency.

3) blue light harms the third sleep well: blue light will inhibit the secretion of melatonin, and melatonin is an important hormone affecting sleep, the current known role is to promote sleep, adjust the time difference. This also explains why playing a mobile phone or tablet before going to bed can cause poor sleep quality or even difficulty falling asleep.

5)  Since short-wavelength light has a relatively high energy, the incidence of fine particles in the air is high, which is the main cause of glare. Patients with retinopathy and post-operative surgery (excimer surgery, cataract surgery) are very sensitive to light and can feel abnormal glare, which is also caused by short-wave blue light.

7) When the visible light is focused in the eye, the focus is different, and a focal distance difference is formed between the two focal points. This is the main reason for the blurring of vision.

8) Blu-ray is the main cause of digital visual fatigue (DEF).

What exactly is blue light?

Blue light is a short-wave high-energy light having a wavelength between 400 nm and 480 nm.

The blue light in this wavelength will increase the amount of toxin in the macular area of the eye, which seriously threatens the health of our fundus.

Blu-ray-induced blind eye disease, the current effective solution is to film screens or lenses. The anti-blue film technology is very mature and low in cost, which can effectively prevent blue light from penetrating.

Not all blue lights are harmful, what is really harmful is blue light having a wavelength within 400 to 440.

Related to it, it is beneficial to the human body. Moreover, short-wave blue light will definitely cause harm to the human eye, which is related to the irradiation intensity and the irradiation time. When the illumination reaches a certain level, it lasts for more than two hours, and it is possible to damage the retina.

What Are Blue Light Blocking Glasses And Do They really Work?

But do blue-light blocking glasses stand up to the hype—or are they all hype?

There is no doubt that everyone of any age and any degree of skin pigmentation is susceptible to UV damage, however the harm to the eyes of blue light is still inconclusive in science.

Blue light in particular has been linked to sleep issues, by delaying the release of melatonin (a sleep-inducing hormone), and disrupting the body's circadian rhythm, according to a 2015 study in the journal Proceedings of the National Academy of Sciences. The blue light cause sleep disorder is true.

There is one thing blue-light blocking glasses might be able to do, help you sleep.

Because blue light has been shown to put you at risk for sleep-onset insomnia, says Lisa Medalie, Psy.D., behavioral sleep medicine specialist at The University of Chicago, blocking that blue light might negate that—especially if you can't give up your screen time before bed.

“[Blue-light blocking glasses] have been presented as options for those who insist on using devices and still want melatonin produced,” says Medalie. In fact, a small 2009 study in the journal Chronobiology International found that people who wore blue-light blocking glasses for three hours before bedtime slept significantly better after three weeks. Still, this research isn't conclusive.

You could also, you know, disconnect an hour before bed, take a hot bath, listen to music, or read a paper book instead of curling up with your smartphone, Medalie says.

There are two ways they work

1)  First, they filter blue light through the film layer,

The lens is basically transparent, and the film layer is mostly blue, so the background color of the lens presents a pale yellow visual effect.

2)  Second, those glasses lenses are made by adding special materials to the lenses during the production process, and the lens itself will show a yellowish visual effect. Those lenses have the function to filter blue light.